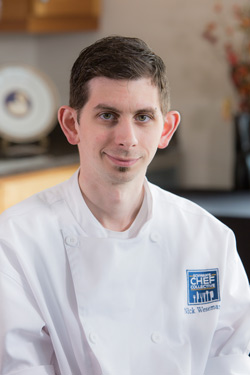 Nick Wesemann, pastry chef at Kansas City’s The American restaurant, has always been in the kitchen. Whether it was making profiteroles and meringues with his family growing up or cooking meals for friends in college, Nick was continuously in the kitchen experimenting. This experimenting helped Nick become a semifinalist for the James Beard Award for Outstanding Pastry Chef in 2014 and 2015. Prior to being The American’s pastry chef, Nick worked as a line cook at The American and as a chef at the Hyatt Regency Crown Center in Kansas City.